James Arthur was the victor of the British X Factor’s ninth season in 2012, winning the public vote with a rendition of Shontelle’s rousing ballad “Impossible.” Born in Middlesbrough, England, Arthur had written and performed in various bands since the age of 15, as well as performing solo in pubs and bars in his hometown. Many early recordings of the singer/songwriter illustrate the pop/rock and hip-hop influences that helped to shape his unique voice and style. Before he appeared on The X Factor, Arthur made it into the final 200 contestants of the U.K.’s The Voice TV series in 2011, without managing to progress any further. A year later, he auditioned for The X Factor, where he sang judge Tulisa Contostavlos’ song “Young” and subsequently made it through the boot-camp round and into the live shows.

From then on, Arthur showcased his considerable talents and slowly improved under the watchful eye of mentor Nicole Sherzinger. He was pitted against Jahméne Douglas and Christopher Maloney in the final round of the contest, where he impressed the audience with performances of Cy Grant’s “Feeling Good,” Bob Dylan’s “Make You Feel My Love,” and Marvin Gaye’s “Let’s Get It On.” The final song of the evening — the version of Shontelle’s “Impossible” — was released immediately after Arthur was announced as the winner and made it to number one in the U.K. and Ireland, while also charting across Europe. He then went on tour with the X Factor show, playing across the U.K. in huge, sold-out arenas such as Wembley and the Birmingham LG.

After his X Factor success, Arthur worked alongside singer/songwriter Labrinth and Graham Stack (JLS, Take That, Westlife) in preparation for his debut album. He put out the eponymous release later that year; the album featured “Impossible” and “Roses” (with Emeli Sandé), as well as follow-up singles “You’re Nobody ‘Til Somebody Loves You,” “Recovery,” and “Get Down.” Arthur departed from Syco Music the following year and briefly returned to the scene with an independent release, the rap mixtape All the World’s a Stage. The singer/songwriter made a return in 2016, signing a record deal with Columbia and issuing his second full-length effort, Back from the Edge. The stripped-down and reflective record was led by the singles “Say You Won’t Let Go” and “Remember Who I Was.” The next year, he featured on Rudimental’s “Sun Comes Up” and issued his own solo single, “Naked.” ~ Scott Kerr

Coming in Feb 2020 / Mixtaped / The PDF for Print Edition 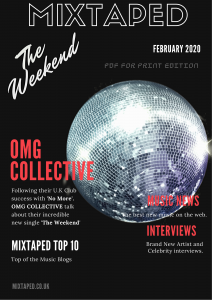