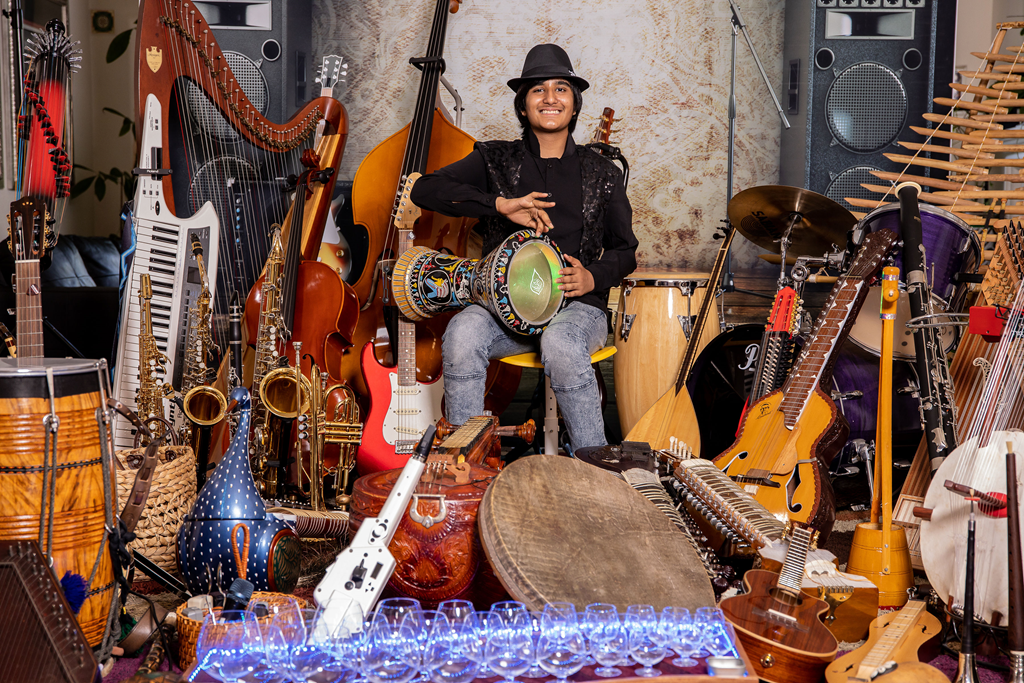 Neil Nayyar has taken a different route, at a very young age; he can play more than 107 instruments and counting. Given his achievements in the music scene and his abilities, one would be forgiven for thinking that Neil is approaching his mid-life but would be surprised to learn that he has just entered his teenage life. While some musicians have mastered a few instruments Neil has broken all the records. At the age of twelve years, he broke the record that had been set by a twenty-seven years old instrumentalist to play 44 instruments. One year later, he almost tripled the number of instruments that he could play when the number moved to 107 settings, a record which most people think would be hard to beat by anybody who dares challenge the prowess of this young artist.

And how did the thirteen year old learn to play all these instruments?

This is a question that has lingered in most people’s mind. His parents say they realized he was good on the instrument and had the talent at the age of five. At this age, most of the kids can only sing along to the tunes they hear from the media; and they are way off the tune. But for this super kid, it was a walkover, being able to play instruments in a way that most people would not do. Upon discovering the talent, they registered him for summer camps where he learned how to play several instruments. He has music teachers spanning different parts of the world; China, India, Italy among other places where he works through Skype.

It is not just playing music instruments, the home-schooled boy is talented in other different ways, he can paint, is good in martial arts and Bollywood dance among other activities. The multi-talented teenage sensation has also ventured into acting, he recently signed a contract with Conquest Management and has already auditioned to perform at Sacramento Kings at Golden 1 Center, an indoor arena in downtown California on October 28th, 7 P.M at the opening of the game.

When asked about his favourite performance so far, Nayyar was quick to point out the California State Fair, an event where he sang and played four instruments among other Saxophone, Sitar as well as Sheng and Sauna- both of which are Chinese instruments.

To Nayyar, music is not just a feel-good moment but also a way that he connects with the people where he shares his music and draws inspiration. He says that through learning to play instruments he has learned different cultures. This is his favourite part, where he meets new people and cultures, seeing how they play the instruments. For him instruments represent people and cultures providing a perfect avenue to promote unity and cohesion around the world.

Recognition has been flowing; the Elk grove sensational teenager has been named the youngest person to play musical instruments by Assist World. The talented boy is now looking to get recognition by the Guinness World Records for his extraordinary talent. Recently, he appeared on the CBS owned Good Day Sacramento talk show where he was interviewed about his music accomplishments.

Nayyar says music is his passion; he lives, dreams and thinks music all the time. He reveals that passion started at a very young age with a hundred dollar drum. He is not done yet, he says the sky is not the limit and he will add more instruments. He revealed that he is currently working on his 108th musical instrument. The young talent has many plans for his future. He recently signed with a talent agency and has his sights set on adding acting and singing to his growing repertoire. Neil has also been working with vocal coach Raquela Burt of Elk Groves Sings as he completes his upcoming World Music album.

Nayyar believes that the future is bright and he will keep going hoping to achieve even greater things. The sky is not the limit for a boy who is soon set to assigned parts in a movie that suits his super talent.

THE FULL HISTORY AND WORLD RECORDS OF NEIL NAYYAR

He continues to perform at various Talent shows, fairs and festival from beginning of his music journey. He also got chance to audition for America’s Got talent and Steve Harvey show. Recently, he was invited to perform National anthem by City of Elk Grove to honour the Sikh Police cop who was killed in Houston Texas (Candle Light event). Last week, he is invited to perform at United Nations Sacramento Chapter for Climate Change event.

In Aug. 2019, he applied to audition to perform at Sacramento Kings NBA game. He passed the audition. On Oct. 28, he performed in front of 17000 people at Golden 1 centre. Right after his performance, he was invited to interview with ABC10 in the Media Room of Sacramento Kings.

He has been broadcast on many news channels since he started his journey. Fox40, ABC10, Good Day Sacramento, Fox San Diego, KRON4 San Francisco, Univision 34 Los Angeles, Magazines, Newspapers world wide. His news was also broadcasted in Turkey News channel in 2017. He is on yahoo, google News. if you put his name on google, you can see him all over.

He just turned 14, and now in 9th grade at Connections Academy (Online School). He is also working on his first album which include 107 instruments.

We are expecting that album to come out in early 2020. In August 2019, he also signed a contact with an Acting Agency which is based in Los Angeles/New York. We are looking forward to see him in Commercials/Movies/TV etc. He also auditioned for music video Darkside of Blink 182 in month of September.

He also sent audition for Honda Civic Commercial. His music is inspired by many musicians around the world, Some of them are Miles Davis, Dave Brubeck, A.R Rehman, Zakir Hussain, Ravi Shankar, Metallica, Kenny G, Prassanna, Foo Fighters and Beatles.